There’s no doubt that games can be very powerful learning tools, and at my institution, as at most higher education institutions, there is momentum to introduce games-based learning into the curriculum.

About a year ago our library set out on the journey to introduce games into the library, acknowledging that it was new territory for us, that it would be a challenge to achieve the right balance between the learning and the fun, and that the best approach was to take it in small steps – to learn through a process of trial and error.

The first step was to increase our awareness of what was happening in the gamification world, both generally and more specifically in the academic library context.  We established a Gamification blog to post news and information about gamification and have recently started contributing to a Scoop It on Games, Gaming and Gamification in Higher Education, maintained by Curtin Teaching and Learning. These avenues have been a good way for us to look at different examples of how educators are using games in learning.

There have been two opportunities to explore and develop games in the library this year, both related to the other. The first was a library initiative to create a scavenger hunt style orientation game for new students to the library using mobile devices.   We are still in the middle of this project, having designed and created a version of it, and playtested it to get feedback before the next iteration of the game.

The second was through Curtin’s LinkUp program. LinkUp is part of AHEAD (Addressing Higher Education Access Disadvantage) and is an education program for high school students from low socio-economic backgrounds, to introduce them to campus life and to encourage them to aspire to a university education.  The program – which works with around 12 schools – is designed to build on the prior year experience with participants returning throughout their high school education to participate.

For LinkUp we designed some library game-based activities around the use of ipads which LinkUp had purchased. We wanted to help develop students’ digital literacy skills by exposing them to some apps they may not have encountered, as well as help them learn some things about the library. The activities were underpinned by a hands-on, participatory learning approach through which, all up, around 700 high school students participated.

What has been interesting for us is to see how each game design has been shaped by what went before, as we have learned from our experience.

Our first activity to design was for Year 11 students whose teachers were very keen for them to learn some research skills to help with their study. So we designed a game called “Publish or Perish”, and used the SCVNGR app to provide the framework for a challenge based activity where the students earn points for completing challenges.  See the full activity in our student handout.

The students worked in pairs to complete four challenges which involved watching videos that we had created and then doing various activities with apps that put the learning into practice – activities around searching, evaluation and referencing information.

When their challenges were complete, they then created an ebook using the Book Creator app. They had to include the title page and verso and correctly referenced information they had located, and illustrations using Book Creator. Finally, they viewed their finished product in iBooks and we gave a prize to the group who produced the most complete book.

We then moved on to the Year 10s. Having been reliably informed that this age group were at their best if they were kept physically active we decided to create a scavenger hunt style game called “Pace Space Race” – again using the iPad minis and a range of apps.

This game involved the group spitting up into three teams and exploring 3 levels of the library – we used QR codes to access floor maps and they worked in pairs to find particular reference books or various facilities or spaces, where they would use Aurasma, an augmented reality app, to find a secret word or hidden message. The students absolutely loved the augmented reality – I don’t think any of them had experienced it before – and some of them were really excited when we were able to show them how to create them for themselves on their own devices. Watch a quick 30s demo  and see the full activity in our student handout.

Buoyed by the success of Place Space Race, we wanted to adapt the model we used to our other project, the self-paced library orientation game for undergraduates.

For the orientation game our original intention was to use SCVNGR (which I wrote about in a previous post) but by this time we had realized the limitations with the app (and its just as well we didn’t because it isn’t currently available). However we designed the game around a similar structure, with a three treks one on each level of the library, and within each trek there was a set of challenges that involved moving around the library.

Initially we intended to incorporate the use of a few different apps as we had done with the year 10s, but ultimately we decided to simplify it by running the game out of the one app, Aurasma. Players follow a map to find locations in the library where they then access information about the resources and services offered by the library through videos, which are triggered by the images on posters located at particular spaces. We also introduced a gamification element by having quiz questions at each location where they could accumulate points.  Watch a quick 30s demo.

With this game, we are currently at the playtesting phase – we have asked groups of library staff and our student assistants to play the game and provide feedback. Some academic staff have also incorporated it into their teaching, and we’ll be seeking feedback from them as well.

From the feedback we have had so far, it is clear that the game is far from perfect. Aurasma is great for creating the augmented reality content and thus the ability to deliver the content in an interesting way, and we got very positive feedback about these aspects. However the app isn’t well suited to this kind of game, – there are a number of technological barriers to overcome to get set up and the game mechanics are quite clunky. But we are keen to learn from the experience and continue to modify and improve it. 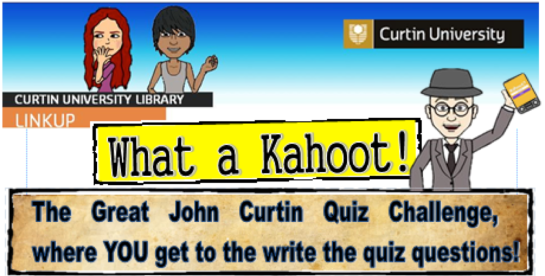 A lot of what we learned from our mistakes in Pace the Space has been beneficial in developing our latest game for the year 8 LinkUp students.  In my view, this has been our most successful activity of all – ergo, we must be learning some things!

The focus for the year 8s, as their first visit to the campus, was to introduce them to John Curtin and the leadership values that he has the capacity to inspire – we had a wealth of educational resources and archives to work with from the John Curtin Prime Ministerial Library.

Drawing on archival material from the collection we created 10 posters covering aspects of Curtin’s life, and included augmented reality content, layering some storytelling via cartoons, some videos, some textual or graphic information. The students were formed into ten teams and each team was asked to create one quiz question each based on the information from one of the posters.

We then entered the quiz questions into Kahoot while they looked at the rest of the posters to prepare for the quiz.  Each team then competed in the online quiz via their ipads – and had a huge amount of fun, as this 3 minute video of one of our classes in action, shows so well.  Pretty much without exception, the students were fully engaged in the activity, which I put down to not only the highly interactive nature of the content, but their investment and contribution to to the development of the game itself.

We’ve had very positive feedback from staff and students involved in LinkUp, and will continue to develop the library program as well as consider how this approach to learning can be adapted to our undergraduates.

The next phase with the orientation game is to modify it to address some of the problems we identified. We’ll remove or change the gamification elements, and alter the design so it can be played with groups of people, rather than as a self-paced game.  It could then be incorporated into our face to face orientation tours, where we can provide help and encouragement to use Aurasma.  We also want to use the great content we made to create an online version of the orientation tour.

I’ve been very fortunate to be involved with these projects with the help of some very skilled technician colleagues – Jo Comerford, Rowena Holland, Jenny Lee and Michele Gradisen.  We’ve been on an exciting journey together, and it’s been a great learning experience for us. We learned to use a large range of tools including Crazy Talk animation software, Animoto, iMovie, Aurasma, Photoshop, Sketchup, as well as a whole range of new apps. We’ve also learned a lot about the benefits and challenges of teaching with ipads.

For me, it’s much more about the process, rather than the eusive end goal, which seems to shape-change into something else the closer we get!

Probably the most important thing we have learned is to be not afraid of failing.  Creating these activities involved many leaps of faith without fear of failure, and then learning from our mistakes to find a way forward.

One of the best things for me has been experiencing first-hand how wonderful it can be to learn through play, through experimenting, through not being afraid to try things out and see what happens.  It’s been a lot of work, but it’s also been a lot of fun.

And here’s to a whole lot more fun in the year to come, I hope!